Here's our new grandson, Gabriel, photographed over Easter weekend at about three and a half months. 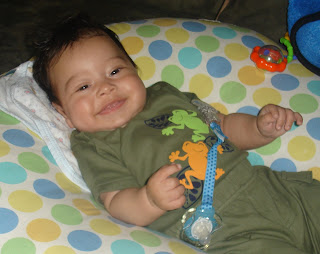 Email ThisBlogThis!Share to TwitterShare to FacebookShare to Pinterest
Labels: personal

I think I got it!

In my April 12 post (What does William Safire "do?") I wondered what Safire meant by "we are living in syntax." It suddenly dawned on me, perhaps because it's Sunday: he was playing off the phrase living in sin! Get it? Living in sin....tax. Yes, folks, the Ravin' Maven thinks that using "phrasal templates" such as don't do X is (kind of?) like living in sin. You know, like, it's wrong. And you'll go to Hell for doing it.

At least he does have a sense of humor, even if he doesn't know much about the science of language. For example, in his book Fumblerules, published way back in 1991 or thereabouts, he includes the rule:

OK. But the rule itself, as he gives it, wouldn't make sense if it weren't possible and easy to "verb nouns" in English (let's table that motion; take 'em downtown and book 'em; etc.).

This pattern represents what some linguists call a zero-derivation: A verb can be derived from a noun by adding a zero suffix. Or prefix- it's zero, so who cares? I do prefer suffix, though, since most derivational affixes that change the lexical category of the word they attach to appear to be suffixes: to walk (verb) > walker (noun); slow (adjective) > slowly (adverb); ugly (adjective) > ugliness (noun); and so on.

Of course, this doesn't work in all languages; for example, try simply declaring that the Spanish word libro (book) is a verb. Can't be done. This is because, while all languages share some rules with all other languages (universal grammar), all languages also have rules that are shared with only some, or perhaps even no, other languages.
Posted by Ronald Kephart at 4:25 PM 3 comments: Links to this post

What does William Safire "do?"

William Safire has just finished complaining about use of the phrase I don't do X, as in the time ex-alleged president Bush was asked by a reporter about the "nuance" of his answer and he replied that Texans "don't do nuance."

Safire is a language maven; these are people who have little or no formal training in linguistics but who nevertheless believe, perhaps by virtue of the fact that they can speak and write, that they are experts on the subject of language.* The schools are filled with "language arts" teachers who pretty much fit this category. For language mavens language change is generally anathema, which is ironic since many of their favorite English authors spoke and wrote in Englishes that were very different from those that they speak and write in- but that's another blog post.

Safire provisionally traces the history of don't do X to the stereotypical line delivered by women hired as domestic servants: I don't do windows. He is informed that don't do X has become a "phrasal template," and this is where things get a little weird:

But does the ready acceptance of this “phrasal template” mean we are living in syntax, undermining the rules of order and word relationships in sentence structure on which we base our grammar?

What, if anything, does this mean? Syntax is "the rules of order and word relationships in sentence structure on which we base our grammar." So, in Safire's view, we are undermining syntax by "living in" (whatever that means) syntax?


*Sort of like me claiming, on the basis of the fact that I eat, digest, and poop every day, that I'm an expert on gastrointestinal functions.
Posted by Ronald Kephart at 1:48 PM 1 comment: Links to this post

I have believed all along that we urgently need to conduct a thorough investigation into the Bush administration's moral and legal transgressions. Now I am convinced that some kind of "truth commission" process isn't enough. Torture -- even the torture of evil men -- is a crime. It deserves not just to be known, but to be punished.

This comes as the evidence that the Cheney/Bush administration and their assorted minions orchestrated the use of torture on detainees at what most likely was a US base in Afghanistan grows into a steaming pile of crapulence. The strongest evidence is contained in a just-released report by the International Committee of the Red Cross that details the experiences in US custody of 14 detainees who were interviewed for the report. Although interviewed separately, the detainees' accounts of their treatment are consistent with each other and also with what is already known about some of the "techniques" used, such as water-boarding.

Meanwhile, Baltasar Garzon, the Spanish judge who indicted former Chilean leader Augusto Pinochet, is mulling over indictments against a number of Cheney/Bush officials who are implicated in the US torture regime: Alberto Gonzales, John C. Yoo, Douglas J. Feith, William J. Hayes II, Jay S. Bybee and David S. Addington. Garzon's ability to do this is assured by something called universal jurisdiction, under which a country can indict, subpoena, and prosecute foreign nationals who are deemed to have committed certain egregious acts, such as genocide and other crimes against humanity. Garzon was supposed to have decided whether to issue the indictments by now, but I haven't heard anything new as of this post. Examples of the use of universal jurisdiction include the indictment of Donald Rumsfeld for war crimes and crimes against humanity while he was in France, and the US trial of the son of former Liberian leader Charles Taylor for crimes, including torture, committed in Liberia.

Some of us have been calling for an accounting of the Bush II presidency pretty much since the day he was installed in the White House by the Supreme Court after stealing the 2000 election (and of course he may well have stolen the 2004 one also). As bad as that was, few of us could have imagined the dark road down which Cheney/Bush and their handlers would take us. The road was so bad, and so dark, that we became, more than ever before (and we've never really been saintly), a Rogue State.

Is a society worth saving if it is willing to torture to keep itself safe?

It's about time we find out.
Posted by Ronald Kephart at 12:25 PM No comments: Links to this post