This is the sort of thing that makes my head hurt.

This morning while looking through some old files I came across a "language arts" exam given to middle school students in Carriacou (Grenada) in 1983.  The very first question:

Okay, now, we all know what the expected "right" answer was, don't we?  Of course.  It was (d) boat.  Because the word boat has two vowels.  Except that it doesn't, really.  The word boat, pronounced in Grenada as [bot], has one vowel (some speakers produce something like [bʷot] with a very brief labiovelar glide- still not two vowels, though).  The oa spelling of this vowel is an artifact of the convoluted history of the English writing system, not an accurate reflection of the present underlying phonology of English.

Of course, what's going on here is the perpetuation of the ancient language = writing meme, by which any question about language is assumed to refer to the writing system, not the actual spoken language.  Indeed, here in the US of A young people spend their K–college years attending "language arts" and "composition" classes that almost universally focus on writing (spelling, punctuation, etc.), not language.

Anyway, that was 1983.  My head is hurting now because yesterday, in a guest lecture on language, I asked the 100+ students in the lecture hall how many vowels are there in English?  And after all these roughly 25 years of teaching about language, the question still works: they still fall into the language = writing trap.  Their universal answer: five, maybe 6 (a, e, i, o, u, sometimes y).  I then astounded them by pulling out my twelve vowel sounds, as in the following words:

A part of me enjoys tricking students in this way, semester after semester.  And it's so predictable.  But another part of me bemoans the fact that I can still do it so easily.  Students in the English-speaking world simply do not, apparently, receive substantive instruction on the nature of language, or the nature of English. 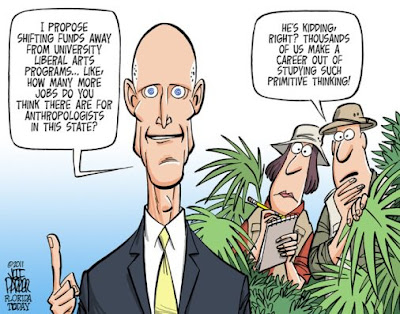 
Instead of a well-rounded, competitive, educated populace, Scott seemingly prefers to develop "foot soldiers for capitalism" as Anthony Carnevale, director of the Georgetown University Center on Education and the Workforce puts it. The Governor appears satisfied with the idea of turning our universities into VoTech centers.
Plus, all that critical thinking and problem solving, nurtured by a liberal arts education, just gets in the way of ideological agendas like Scott's.

Nicely put.  I'll save my own rant for later.
Posted by Ronald Kephart at 3:01 PM No comments: Links to this post

It's cults all the way down (and back up!)

Anthropologically speaking, the recent brouhaha over whether Mormonism is a "cult" is amusing, and it offers one of those teachable moments we all live for.  Robert Jeffress, a pastor at the Dallas, Texas, First Baptist Church, referred to Mormonism as a "theological cult" in an interview with reporters at the Values Voter Summit on Friday, October 7.  You can watch him defend his remark on Fox News here.

The whole thing is amusing because, in the US Folk Model, the word cult is to religion roughly what dialect is to language.  A variety of religion (or language) is tagged as non-standard, perhaps a bit weird or undesirable, the property of some minority or other that isn't quite inside the pale.


The Merriam-Webster online dictionary has these as the first three definitions of cult (my emphasis added):

Note that the third definition, the one Pastor Jeffress presumably had in mind, is the negative one.  The first two reflect the history of the term, which has the same root as culture (Latin cultus) and referred to the set of beliefs and behaviors associated with the worship or veneration of a god, saint, etc.  These definitions are not what most people have in mind when they use the term cult, and I would argue that to reflect actual usage in US society Merriam-Webster have these in the wrong order.

At least some anthropologists, following Anthony F. C. Wallace, continue to use cult in this broader, neutral sense to refer to any system of beliefs and behaviors involving the supernatural in some way.  Wallace identified four basic types of cults: individualistic; shamanistic; communal; ecclesiastical. Individualistic and shamanistic cults are most characteristic of small-scale societies whose subsistence is based on foraging or horticulture.  In these cults there are no full-time religious practitioners and most of what needs to be known to manipulate the supernatural is available to all, though especially talented individuals (shamans) may be consulted.  Ecclesiastical cults, typical of large-scale, stratified, state societies, have full-time practitioners who control access to the knowledge and also the performance of rituals.  Historically, the bureaucracy associated with these cults was frequently intertwined with or even equivalent to the state bureaucracy.  Communal cults appear as a bridge, but are most obvious in some pastoral societies such as the Maasai, where for example all males in an age-set undergo the ritual that transforms them from warriors to elders.

Religious cults conceived in this way form an implicational scale, so that for example people whose lives are centered on an ecclesiastical cult nevertheless also have beliefs and behaviors that reflect communal, shamanistic, and individualistic levels of organization.


So, anthropologists might use the word cult to describe Christianity as a whole, or at any level; the same with Islam, Judaism, or any other set of beliefs and behaviors.  Haitian Vodoun is a cult, and so is Jeffress's Southern Baptist Convention.  Everything is a cult, or nothing is a cult.


It's dialects, and cults, all the way up and down.
Posted by Ronald Kephart at 12:29 PM No comments: Links to this post