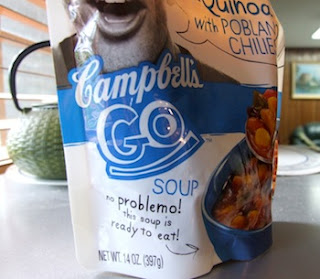 This soup, chicken with quinoa and chilis, was quite good.  However, the package contains the phrase "no problemo."  Really, Campbell's?  This is a disturbing use of what linguistic anthropologists call "Mock Spanish."  One of the scholars who's written most about this usage is Jane Hill (University of Arizona); here's a link to a paper on Mock Spanish by Professor Hill.

As Hill writes, "... everyday talk, of a type that is almost never characterized (at least by Anglos) as "racist'', is one of the most important sites for the covert reproduction of this racism. "Mock Spanish'', the topic of this paper, is one example of such a site."
Posted by Ronald Kephart at 3:16 PM No comments: Links to this post

Email ThisBlogThis!Share to TwitterShare to FacebookShare to Pinterest
Labels: language and culture, racism

In last night's debate between Massachusetts Senate candidates Elizabeth Warren and Scott Brown, Brown told the audience "The professor said she is a Native American, a person of color, and you can see she's not."

You can "see" that she has no Native American ancestry? Really? I guess Brown has some kind of special vision that allows him to see into people's DNA. Or something. I don't know if Warren has Native American ancestry or not, but I do know that you can't just look at someone and tell. As anthropologists have demonstrated, there is no reliable way to place people into the imaginary categories that we call "races."

And...  Given what we know about gene flow in the United States, there's a better than one in ten chance that Brown himself is African-American.  This is because placement in the culturally constructed category of "African-American" in the US is determined by what anthropologist Marvin Harris called the Hypodescent Rule: any [known] African ancestry makes you African-American.
Posted by Ronald Kephart at 1:41 PM 1 comment: Links to this post

Email ThisBlogThis!Share to TwitterShare to FacebookShare to Pinterest
Labels: politics, race and ethnicity

Email ThisBlogThis!Share to TwitterShare to FacebookShare to Pinterest
Labels: humor, politics, The Simpsons

On Tuesday presidential candidate Mitt Romney (hereafter "Willard") told a group of supporters in Utah "We want to help those in need, but we don’t believe that redistribution is the way to create a bright future."

The key concept here is redistribution.  This is a term used by anthropologists to label a type of economic activity in which a surplus of goods and services is aggregated and then given out in culturally prescribed ways.  Redistribution is different from reciprocity, another form of exchange, in that reciprocity is generally carried out between and among individuals: the meat brought in by successful Ju/'hoansi hunters, for example, is shared out among the members of their band, most of whom are kin. Reciprocity may be generalized, in that the givers give with no special expectation of immediate or equal return.  Reciprocity may also be balanced, i.e. trade in which givers expect an equal return from recipients.  Reciprocity may also be negative, in which givers get back less than they give; nobody wants that.  Reciprocity, or sharing, represents probably the oldest form of economic exchange devised by humans.  It is the most typical mode of exchange in foraging (hunting and gathering) societies.

Because of the nature of what they gather and hunt, foraging peoples are rarely able to maintain a surplus.  With the advent of food production some 10,000 or so years ago, however, people in some places began growing crops and keeping animals that allowed for the development of surpluses.  This permits larger and more settled communities: the distinction between bands (foragers) and tribes.  Under these conditions, a farmer or herder might be able to gather enough of something or other together, usually with the help of kin, so that they can stage a ritualized giveaway for everyone in the community and sometimes for people from other nearby communities as well.  In its most pristine version, the giveaway, or redistribution, is complete, so that the recipients end up with everything and the givers are left with nothing.  However, the givers do gain important prestige from their giveaway.  This type of redistribution is called egalitarian redistribution.

As food production becomes more, er, productive, societies become more dense and more elaborate systems of hierarchical ranking with a well-defined leader at the top develop.  These societies are what anthropologists call chiefdoms, and while there has always been some ranking based on factors such as age and sex, now people's place in the society tends to be determined by their degree of relatedness to the chief's family.  The chiefs have more power over their "subjects" than leaders of bands and tribes have. Chiefs can order their folks to bring in a prescribed share of their crops and animals.  Some of this surplus ends up on the chief's table; some can be held back and then given out in times of need, say when a family's crop fails and they need help.  This is stratified redistribution, and it evolves eventually into what we call our tax system.  It's a fairly small jump from chiefdoms to the entities we know of as state societies.

Now, because Willard does not understand human cultural evolution, when he says "we don't believe that redistribution is the way to create a bright future," he is interpreting redistribution as a recent thing that Karl Marx and the Communists dreamed up.  In this view, redistribution is a perversion of some prior, more pure means of moving food and other things around, probably involving money.  Redistribution happens when people who don't have stuff see the stuff other people have and pressure them into giving some of it up.  In reality, redistribution was a cultural adaptation to a certain mode of food production, an adaptation that helped humans survive into that "bright future" that they were even then probably hoping for.  Redistribution happened long before money happened.  It's a part of what made us human.
Posted by Ronald Kephart at 10:34 AM 2 comments: Links to this post

I didn't write anything about 9/11 this time either

Last year at this time, I posted a non-post of sorts about 9/11.  At least it had a couple of essays that seemed relevant, including one by Will Rivers-Pitt.  Please go have a look.

Meanwhile, I'm pretty much continuing the tradition this year.  Except for a couple of things.  For one, it occurs to me that as we remember our 9/11, it would serve us well to recall another 9/11, September 11, 1973.  This was the day the world came crashing down on the Chilean people.  A US-supported fascist named Augusto Pinochet ousted the popularly elected and left-leaning president of Chile, Salvador Allende.*  A pretty decent summary of that event can be found here.

Meanwhile, closer to home, it's worth remembering that our own 9/11 happened at least partly due to the mind-blowingly catastrophic ineptitude of our own elected leaders. The New York Times has a good summary.

Finally, we are reminded of John Stewart's treatment of the debacle regarding Condoleeza Rice and the President's Daily Briefings leading up to 9/11/01. One of those PDBs was titled "Bin Laden Determined to Strike in U.S."  Stewart takes an incredulous look at Secretary Rice's bizarrely incoherent testimony before Congress.

Posted by Ronald Kephart at 2:16 PM No comments: Links to this post

A brief note on pronouns

A Facebook friend posted this Calvin and Hobbes cartoon, prompting some thoughts on English morphology, a topic coming up soon enough in my linguistics class:

One interesting thing about English is that some things people think are pronouns really aren't. In English, the personal reference sets are:
(1) I, we, you, she, he, they   [subject pronouns](2) me, us, you, her, him, them   [object pronouns](3) my, our, your, her, his, their   [possessive somethings](4) mine, ours, yours, hers, his, theirs   [possessive pronouns]

Note that I and me are true pronouns; they can occupy the Noun Phrase slot in a sentence:

The forms my and mine, on the other hand, are different. Mine is a true pronoun, but my needs the support of the Noun it specifies. Note the following responses to the question Which book does Mary see?.  By linguistic convention ungrammatical sentences are marked with an asterisk (*):

Note that the English articles also follow this pattern:

These possessives, and the articles, fall into a class that linguists call Determiners.  Determiners in English precede their Nouns and occupy a syntactic node called Specifier, because they specify which or whose something the Noun references.  In English, specifiers include the possessives (my, our, etc.), the articles (the, a/an), and the demonstratives (this, that, etc.).

Traditionally, language arts teachers have referred to these forms as "adjectives," but they are not adjectives.  For one thing, they can't be made comparative or superlative (*myer, *myest).  For another, they can't be modified by very, as in *very my (book).
Posted by Ronald Kephart at 11:31 AM No comments: Links to this post

Mitt Romney: a human being who built that

Posted by Ronald Kephart at 2:57 PM No comments: Links to this post