The other day, the US abstained from voting on a UN resolution condemning our decades-long trade embargo on Cuba.  The US ambassador to the UN (I think) commented after the vote while we didn't veto the resolution, we are necessarily still concerned about Cuba's human rights abuses.  And just to be clear, I'm sure that Cuba does commit human rights abuses.

Meanwhile, in the United States, people continue to be denied access to health care for not having "insurance."  People continue to be overwhelmed by the costs of education and the debt they must accumulate to make themselves more competitive in the "job market."  And also meanwhile, workers in "right to work" states as well as in the country more generally find themselves at the mercy of a system that denies them the right to bargain collectively with their employers for better working conditions and benefits.

Make no mistake: these are human rights abuses carried out by the United States on a massive scale, and apparently with no end in sight.
Posted by Ronald Kephart at 7:46 AM 1 comment: Links to this post

Email ThisBlogThis!Share to TwitterShare to FacebookShare to Pinterest
Labels: complaints and grievances

OK, so all yesterday they've been mentioning on the News that an 11th person has been killed by those defective Takata airbags, which are already under recall. Meanwhile, Thursday on the Diane Rehm program, a British journalist, in a really heartbreaking story, reminded us that every day, about 7 children and teens are killed by firearms in the US. That's over 2500 a year. Where's the recall notice for these goddam firearms?
Posted by Ronald Kephart at 10:59 AM 1 comment: Links to this post

Things that keep me awake at night...

Am I alone in thinking that there is zero moral equivalency between some donor to the Clinton Foundation getting to sit at the Chinese ambassador's table and what is being perpetrated upon all of us by the Republicans in the name of their NRA donors and lobbyists?

Posted by Ronald Kephart at 8:49 PM No comments: Links to this post

Email ThisBlogThis!Share to TwitterShare to FacebookShare to Pinterest
Labels: politics

Not officially, of course.  But tomorrow morning I meet with the chair of our department (Sociology, Anthropology, and Social Work) to strategize our upcoming departmental "retreat," which takes place a week from today.  I have to meet since I'm the "coordinator" (they don't give it the respect of "director") of our anthropology program, which includes a BA in Anthropology as well as a Minor in Anthropology.
So, how did I spend my summer?  Not writing blog posts, obviously.  This summer was a staycation for me, with twice-weekly visits to physical therapy to help with my aging back and legs (I turned 71 on July 8).  I tried to get out, on the days I didn't have PT, to walk at least a mile or so, but it was hard because July was a very hot, dry month, with temps in the high 90s almost every day and "feel-like" temps over 100º.  My longest walk was about 4 miles, shortest was usually a 0.7 mile loop in a nearby park.
About that 0.7 mile loop.  I've decided that when I talk about it, instead of saying I walked "a bit less than a mile" I'm going to start saying "I walked a bit more than a kilometer."  Sounds better, right?  A kilometer is about 0.62 miles.  I know this from being a runner and converting the 5K and 10K runs into miles and vice versa.
Posted by Ronald Kephart at 4:09 PM 1 comment: Links to this post

Email ThisBlogThis!Share to TwitterShare to FacebookShare to Pinterest
Labels: personal

So, it's that day of the year again. 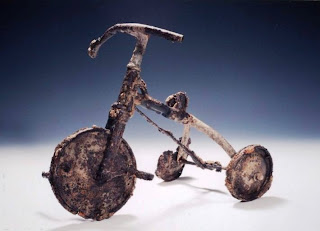 On August 6, 1945, about a month after I was born, my country committed what has to be by any logic or reckoning the most egregious single-event war crime of all time. And then, a couple days later, we did it again. Hiroshima and Nagasaki. People are still living with the effects of these two atomic bombs being dropped on their cities.


And yet, we continue to behave as though these weapons are rational, and we may even elect a President one of whose midnight twitter-fests could easily result in a nuclear weapon being sent on its way to Russia or North Korea, or somewhere.
Posted by Ronald Kephart at 1:22 PM No comments: Links to this post

Email ThisBlogThis!Share to TwitterShare to FacebookShare to Pinterest
Labels: politics, war and peace

English is weirder than most people realize

OK, so I just encountered this on Facebook, representative of the many "English is weird" memes floating around out there. And as I nearly always point out, the spellings shown here have nothing to do with the English language itself. If you want weird, consider this:
To make an English statement into a question, one of the rules is to "move the auxiliary to the front of the sentence."* E.g.
The mouse is eating the cheese > Is the mouse eating the cheese?
But what if there's no (apparent) auxiliary? Then you have to create one and move it:
Mice eat cheese > Mice do eat cheese > Do mice eat cheese?
Wait, there's more. If an overt inflection is present on the verb, the created auxiliary strips it off the verb and attaches it to itself:
Judy walks to school > Judy do walks to school > Judy does walk to school > Does Judy walk to school?
That's something truly weird about English!

* It's not that simple. The Aux really moves to a position under C in the CP that dominates the sentence. But this is enough for one day.

In honor of Fathers Day, here's a photo of my Dad in 1945.  He's standing on a hill in Auxier, Kentucky.  Note the coal-company style houses down the hill behind him. 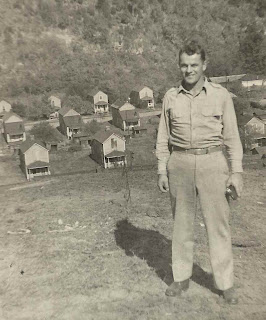 This was around the time I was born, July 1945.  In later years, but while I was still pretty young, Auxier was kind of a magical place for me.  Almost a Tom Sawyer kind of place.  When we were there in the summers I spent the entire time barefoot, and at the end of a day my friends and I would be pretty well powdered over with coal dust.  When I was big enough, my chore would be to tote a bucket down to the nearby well and pump water to carry back to the house (not too far).  I'm pretty sure that was the best water I've ever had.  We used the water for drinking, cooking, and bathing, because there was no piped water into the house.  We also had no indoor toilet, so the restroom was a short hike back past the cornfield.  Good times!

Posted by Ronald Kephart at 1:30 PM No comments: Links to this post

Just a quick thought on our latest mass shooting:

This kind of thing is not going to go away until some of the basic features of our culture change.  Probably central to that would be a weakening of our cult of extreme individualism, which is reproduced every generation via the mode of socialization known as independence training.  Independence training reduces personal responsibility to the larger society, and also reduces empathy.  It helps us remain a nation suffering from culturally-induced psychopathy.

The strength of this cultural feature varies through time, as it does also across social and geographical space, but it's always there.
The "Reagan Revolution," as well as Trump's "Make America Great Again," were/are revitalization movements for this cult.
Posted by Ronald Kephart at 10:00 AM No comments: Links to this post

I was getting tired of the colors on the blog here, so I have changed it up a bit in the hope of getting motivated to do some more consistent writing.

Meanwhile, here's a violin I inherited from my Dad.  It was made in Japan in the 1920s, and I never saw or heard him play it.  It's been laying around unused, so I had a local violin repairer spruce it up a bit, glue what needed to be glued, put on new strings, and so on.  Now to practice and hopefully be able to post a tune here soon... 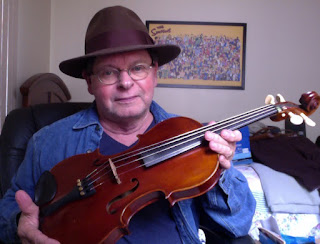 Stay tuned!
Posted by Ronald Kephart at 6:27 PM No comments: Links to this post

Classes started last week, and in my first Linguistic Anthropology class I did an exercise that I often do to begin making students aware of the difference between linguistics and the "language arts" they have mostly been exposed to.  I ask them to write down, quickly, without overthinking, their immediate answer to the question: "How may vowels are there in English?"

I then answer them to think a moment, and tell me what question they actually answered.  Somebody usually figures out that the presumed question was "How many vowel letters does English have?"

Then I suggest to them that an important first step in learning to think like a linguist is to stop assuming that any question about language defaults to the writing system, rather than to the language itself.   The question that a linguist  would have assumed is "How many vowel sounds does English have?"

As a wrap-up, I offer to "show them my vowels."  I don't use phonetic symbols in this lesson, I just write words that illustrate the vowel sounds in my English repertoire.  However, for this post I'll include the phonetic symbol: 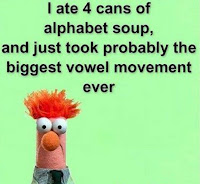 I added that because I come from the southern Appalachians, I have probably the rarest vowel in the world:

This gives me a total of 12 vowels (not including diphthongs), quite a lot more than the "language arts" answer of "five."  The awareness of this difference, and the awareness of what language questions mean to linguists, provides a first step in learning to think like a linguist.

* I am careful to point out that my difference between caught and cot is not universal among English speakers.  Some students volunteered that these words are homophones for them, as they are for many North American English speakers.


Posted by Ronald Kephart at 3:04 PM 3 comments: Links to this post