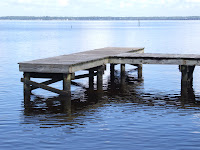 This morning, I took our dog for a walk out on a pier that juts into the St. Johns River near our home. There is a little docking platform about halfway out, and when we got there we discovered a pod of half a dozen or more manatees (Trichechus manatus) churning up the water around the dock, nibbling algae off the pilings and otherwise feeding on the underwater plant life. Luckily, I had walked with my camera, and the critters practically dared me to take their pictures. 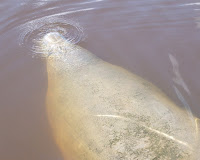 In these photos, you can see one of the things that make me want to opt out of being "American": the wounds on the manatees' backs caused by their being run over by morons in speedboats. People here like to put large boats with huge, overpowered engines in the rivers and creeks, and then blast through the water, caring nothing for what might be in the way. Manatees are especially vulnerable because they have to come to the surface for air now and again, and so, if they're lucky, they collect these scars; if not, they die. 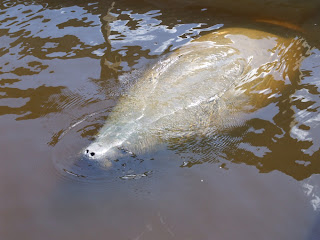 Anthropology can explain this by evoking the American mode of enculturation called Independence Training (IT). IT begins at birth and produces a tendency for Americans, or at least "good" Americans, to see themselves as the center of the Universe, rejecting ties of reciprocal interdependence, decrying the value of social responsibility. How else to explain our lack of national health care, the difficulty we have with trade unions, our preference as a nation to "go it alone" (Iraq, Afghanistan, Grenada, Vietnam...), our fear of the very word "socialism," even our antipathy toward the United Nations and our refusal to obey the World Court. 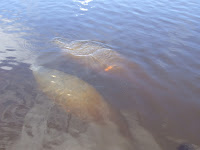 But back to the manatees. I think that the reason their plight bothers me so much is that, as a Peace Corps Volunteer and later as an anthropologist in training, I lived in a small fishing and farming community in the Caribbean. There, people went to sea, you know, like the actual ocean, in tiny boats with lawn-mower size engines, to, like, fish. They did it to survive.


People here run around here in their megaboats for nothing, because they're assholes.
at June 22, 2010 No comments:

Languages is my strength, too...

Here's what to expect when debating anyone living outside evidence-based reality (e.g. creationists, post-modernists...):

Some folks on social media lately have been expressing concern about how "complicated" English is.  There are a couple of things a...