As reported here and elsewhere, Rep. Steve King (R-Iowa) recently claimed that we owe "civilization" to the Europeans; nobody else contributed significantly.  This idea is straight out of the playbook of the 19th-century evolutionists, who claimed that contemporary humans were stuck at different points on a unilineal evolutionary ladder leading from "savages" to "barbarians" and, finally, contemporary Western "civilization."  One of the leading purveyors of this notion was Lewis Henry Morgan (1818-1881), an early American anthropologist.

The paradigm of unilineal evolutionism was debunked for biology by Darwin himself, who imaged evolution as a tree with many branches rather than a straight ladder.  The debunking of the cultural myth was largely begun Franz Boas (1858-1942), another American anthropologist who stressed the importance of particular histories of cultures and societies over their ranking on some grand, ethnocentric scheme. 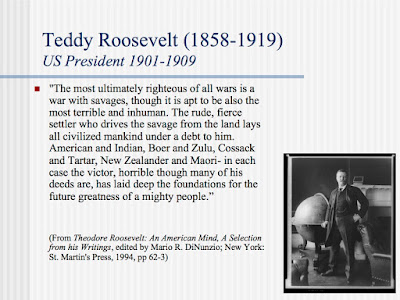 But the idea that societies and cultures could be ranked on a unified scale from "primitive" to "advanced" remained in the general folk model of many Americans and Europeans.  This is a slide I use in some of my classes to illustrate Theodore Roosevelt's investment in the idea.

And this idea is still alive and breathing.  Rep. King's thinking is in a direct line of descent from Morgan, and Roosevelt.  The maybe puzzling but definitely sad thing about this is that not only is King not alone, but somehow, with so little knowledge of human nature and history, he manages to maintain a high position in our government.  One would have thought that the demythologized view of humans ought to have become dominant by now.

We need anthropology, its knowledge and perspective, more than ever.
at March 15, 2017 No comments:

"The idea that every culture is equal is not objectively true"

Rep. Steve King (Iowa): "The idea that every culture is equal is not objectively true."
Well, yeah. There is a sense in which the ethnocentric Rep. King is right, but it's not the sense he was thinking of. Some years ago, in Exploring the Ways of Mankind (1960), anthropologist Walter Goldschmidt proposed some criteria for objectively evaluating cultures without being ethnocentric. He suggested that we look at how well a culture satisfies the physical and psychological needs of its members in terms of:

On these measures, American culture is not doing so well. Don't tell King.
at March 13, 2017 No comments:


You know, I've been used to this kind of thing for many years, because being a linguist/anthropologist means having to listen to people who don't know shit tell you about language and human nature and expect you to respect their nonsense because they're human and they can talk, which means they know all there is to know.

Now, though, this mental illness is spreading into other domains: evolutionary biology, environmental science, etc. Too bad there's no cabinet secretary of cosmology; Trump surely would have found somebody who would be telling us that the Sun revolves around the Earth.

Some folks on social media lately have been expressing concern about how "complicated" English is.  There are a couple of things a...