Today President Obama announced the start of more normal relations with Cuba. This, after over 50 years of treating Cuba and its people really badly.  There's been the embargo, immoral and condemned by pretty much the entire civilized world.  Perhaps more egregious has been the US's support for terrorist activities against Cuba originating in Miami, and in some cases perpetrated by people who actually brag about what they do.

There's a lot to say, but for now I'll point to some photos I took during a visit to Cuba in 2002. I was attending a conference on education and language at the Universidad de Pinar del Río, which is out at the western end of the island.  They're on Facebook, but they're set to "public" so if you have an FB account you should be able to view them.  Here's a teaser: 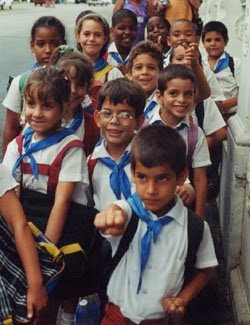 Time to lose that imaginary friend!

OK, here's the thing. I'm pretty sure that religion is not the root of *all* evil. But I am sure that if your imaginary friend is telling you to kill schoolchildren, you need to lose that imaginary friend.  She/he/it is not doing you or the planet any good.  Just lose them.

While we're on the subject, I might give the same advice if your imaginary friend(s) are telling you to hate homosexuals, Blacks, poor people, foreigners, or almost anybody.  Except those whose imaginary friend tells them to kill schoolchildren.  With them, you're on your own.
at December 16, 2014 No comments: